Since the last meeting in October, there have been 38 complaints (as of 19/12/2019) these were received via the Environment Agency and 1 direct to the Company. The majority of these were attributed by the complainants to odour (35) being emitted from the site with 3 specific complaints relating to birds. 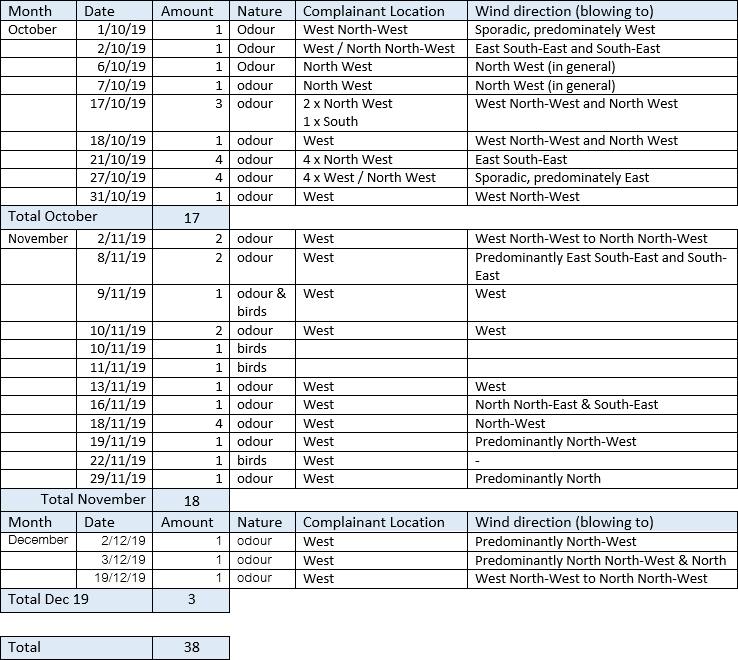 All complaints have been thoroughly investigated in accordance with Neales Waste Management / Quercia’s procedures.

As part of the Company’s investigations, the Company continues to utilise the on-site weather station which is serviced and calibrated by an external company.

Due to various factors, the complaints were considered not to have emanated from the site and the results of all investigations have been reported to the EA in the line with the Company’s procedures.

Regular off-site inspections for odour, birds etc are still being undertaken by the Company.  Typically, these are carried out by a member of staff prior to attending site. This is in order to build a better picture of potential odours being emitted from site and to ensure that the sense of smell of the member of staff has not been desensitised as a result of being on site. This also helps to identify other sources of odour in the area.

Site inspections continue to be regularly carried out by the EA.   Additionally, the Company has also had site inspections (carried out on separate occasions) by Cllr Clifford and Mr D Clough (Landfill Liaison Residential Representative).

Daily checks continue to be made for landfill gas odour, particularly around the full extent of the temporary capped area and sites deep well locations.

Monthly waste inputs have remained consistent since October 2019.  On average, inputs are approx 1700 – 1900 tonnes per week.  The company continues to decline opportunities of additional waste inputs due to the potential of these wastes producing odours.

Techniques for dispersing scavenging birds; bird kite, scarecrows, audible distress calls (fitted to landfill machines) and gas cannon are being utilised to prevent on site issues.  The Company began using less aggressive dispersal methods to reduce the number of scavenging birds moving towards the local population in August/September.  This has continued and appears to have had a positive impact.

The odour suppression unit continues to run during site operational hours as a minimum.

Fencing on the South-West of the site has repaired and reinstated and no further damage appears to have occurred.

The capping of cell 3B/C, which started in July 2019, was suspended in November due to the poor weather experienced throughout the summer and autumn months.  An area of over 10000 m2 has been capped with synthetic materials during 2019.  The work will be completed, including the placement of restoration soils, in early 2020.

It is proposed to construct a further tipping cell in the southern part of the site during 2020.

Improvements continue to be made to the site, its operations and system procedures to ensure the Company’s obligations under its permits and planning permissions are met.

We would be grateful if you would contact the Company in the first instance should you wish to report an issue or complaint on 01257 273311. However, if you prefer to contact the Environment Agency please do so on 0800 80 70 60.  The Company also welcomes residents to visit the site where they will be escorted around the site so they can see the site, the progression and improvements which have been made.